In this post we will cover how we can use Mail.app on OS X to persist.  I was inspired by similar tools which are designed to work with Microsoft Outlook.  I first stumbled upon this article from MWR InfoSecurity, and then this blog post from Silent Break Security.  While rules in Mail.app will not replicate across the Directory Domain, which is one of the awesome things about both XRulez and Ruler, it does have some distinct advantages over other methods of persistence.

It’s not uncommon for a target network to be under 24/7 monitoring.  Most methods of persistence will require the malware to constantly beacon out back to the Command and Control server.  This often times presents a unique network signature, which can discovered by a savvy analyst.  A security minded user or an organization may be enumerating common persistence areas for malware.  This typically includes LaunchDeamons, Cron Jobs, and Kernel Extensions. 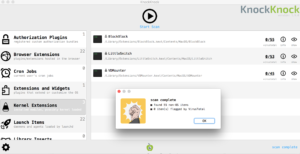 KnockKnock being ran on a system

While this technique will leave artifacts on the host, the fact that common security tools cannot detect it is a plus.

To create a mail rule the standard way, we would go to Mail -> Preferences -> Rules -> Add Rule

For the purpose of penetration testing, we cannot assume however that we will be able to interact within the GUI, and seek a way to perform this from a shell.

If the user is using iCloud syncing, the mail rule will be overwritten by a different file, located at:
/Users/$USER/Library/Mobile Documents/com~apple~mail/Data/$VERSION/MailData/SyncedRules.plist
This file will always take precedence and overwrites the file in /Library/Mail/, and for this reason you should add your mail rule to this file instead.  While the iCloud syncing happens automatically, Mail.app will need to be bounced (restarted) for the application to pick up the new rule if the default location is in use.

There is another important caveat, and that is that mail rules will not be active, unless specified by RulesActiveState.plist which is present in the same directory.

Here is the anatomy of an acceptable rule for what we are trying to do:

The notable fields are:

To activate the rule, just include the Rule ID in the RulesActiveState.plist file as such:

Now that rule creating is covered it is time to talk about the payload.  Payloads are created in AppleScript.  Here is a sample payload:

AppleScript can easily issue commands as you would in the terminal by using “do shell script“.  The second portion is a typical Empire stager.  The additional commands after the ampersand are to hide the AppleScript.  Without it, it leaves the AppleScript payload visible not only in the Activity Monitor, but also as an animated icon on the MenuBar. It appears as a spinning gear.

I’ve created an Empire module that you can use with Empire 2.0 to accomplish all of this automatically.  My original proof of concept script also exists to run manually in which you specify your own parameters and payload.  I highly recommend giving the Empire module a whirl.

Steps to use this module with Empire after gaining an initial session:

When you want to execute the payload at a later time all you have to do is:

The email will be deleted and never delivered to the inbox, and python will spawn a process which will pull down the stager from your Empire server.