I had been well aware of using UNC paths to leak NLTMv2 handshakes with SMB, but I had never heard of being able to do this on ports other than the default SMB port, TCP 445. I won’t go into this type of attack in detail, but it is widely covered in other blogs, and I’ll link to some here.

What made this tweet unique is that it said you could perform the SMB handshake over an arbitrary port, which could bypass the common firewall configuration to block SMB (TCP 445) outbound.

It felt like it was too good to be true, and it was.

When a UNC path is navigated to, the protocol used depends on your provider order. The default Windows configuration will attempt SMB, and then if unavailable, will then attempt WebDAV.

Here is the result of running:

The first thing I wanted to see is, what happens if I specify a port in the UNC path?  Will it try SMB first over that port?

As a control, I first tried net use without a port specified.

It attempted to connect over SMB. I then tried to see what would happen if I did the same thing but explicitly specified port 445, the SMB port.

What happened was that when a port is specified with the @ symbol, it will always attempt WebDAV via HTTP, regardless of port.  It will not attempt to connect via the SMB protocol. I also found this behavior when specifying the SSL/TLS default port, 443.  It will try WebDAV over plaintext HTTP regardless.  To make use of SSL, you must add an @SSL in the UNC path.

So now we know that specifying a port will use WebDAV over HTTP, not SMB.  The question remains however, can we still leak NTLMv2 hashes?

I initiated a WebDAV request via net use:

And this was the result: 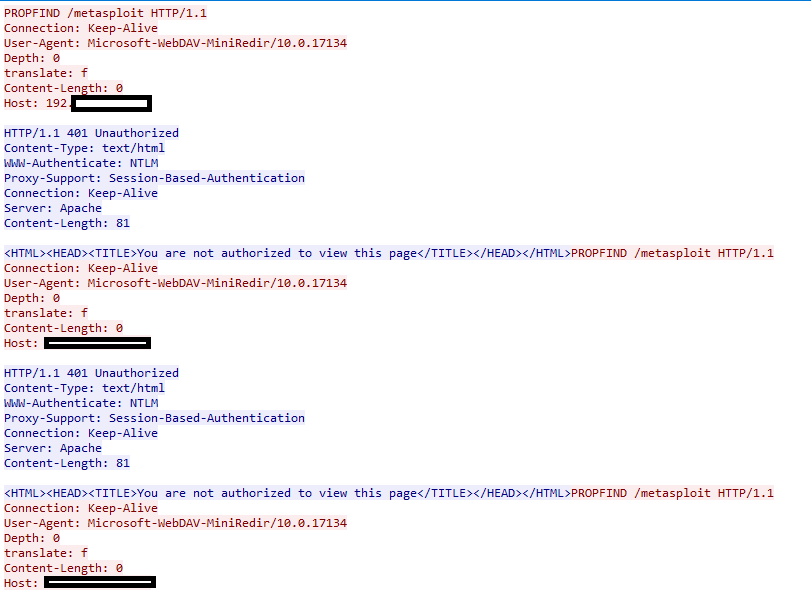 Basically what happened here was this:

Another way to get the NLTM hash to send is by specifying a username and password during the initial request:

This will cause Metasploit to capture the NTHASH.  This provided little utility however, as this did not happen automatically and could only happen if the Windows user manually provides their valid username and password or supplies it interactively.

It is true that tools like Responder can capture NTLM hashes via the web, however this is only for Internet Explorer and only on trusted networks, thus it does not apply in this case.

At this point I consider this to be “Myth Busted” and a good reminder not to believe everything you read on the internet.